The Arizona tree frog, also known as the Wright’s Mountain tree frog is found in the mountains of central Arizona and western New Mexico. It’s natural habitat is located in oak, pine and fir forests, generally above a 5,000 foot elevation. At an unusually small size, the Arizona tree frog ranges in size from as small as 3/4 of an inch long to rarely longer than 2 inches. The majority of these frogs are green, but occasionally they have been found to be a gold to bronze color. They also have a dark stripe on either side of the snout, extending along the side of its body to just before its rear legs. Dark spots and bars can be found very frequently on its back. Considered nocturnal but spending a majority of the year inactive, they can be heard calling out sporadically from the tops of trees, Only the male has the ability to vocalize, by making a clacking sound through his nasal cavity. What an interesting and cute little creature. Don’t you think the frog on this decal looks like it’s smiling? I do. And I also think that you should hop right to it and purchase your own Arizona tree frog decal, today. 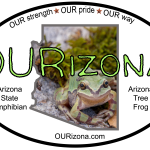