Of all the state symbols, excluding the Arizona state flag, the cactus wren is typically the most well known. The cactus wren is the largest of all the species of wren in the United States. In our state, it is found mostly in the western and southern third of Arizona. Cactus wrens are primarily ground feeders, due to the fact that they are not very strong fliers. Any flight that does takes place is considerably erratic, due to the fact that they switch between rapid flapping and gliding. This explains why the cactus wren is not migratory. Their diet consists of mainly insects and seeds. Most of the cactus wrens hydration needs are fulfilled from what they eat. They rarely drink from free standing water, making them the ideal drought tolerant desert bird. They mate for life, and with their partner, defend the territory where they live. One way they defend their territory is by destroying the eggs and nests of nearby competing birds. The nest shape of our state bird, is generally a prolate spheroid, which means it is similarly shaped to that of a rugby ball or an American football, and approximately the same size, with a tube-like entrance. So, if “bird” is your word, then this is the perfect decal for you. 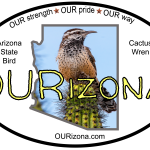