Chandler, Arizona was founded by and named after Dr. A. J. Chandler, a native Canadian. He moved to the territory in 1891 and became its first veterinary surgeon. A few years after the town was created, Dr. Chandler purchased around 200 ostriches, from another farmer in the West Valley, and started a 3-day ostrich drive all the way south of Phoenix and around South Mountain, to Chandler Ranch. At one point, Dr. Chandler had the largest ostrich farm in the entire country. During that time, top quality ostrich feathers were a very popular women’s clothing accessory, as well as men’s and women’s ostrich feather covered hats. His initial success poured over to other area residents who started their own farms. Like any other craze though, the feather fad faded into obscurity, as did the ostrich farms. Don’t be ostrich-cized, by not showing your Chandler pride. Purchase this great big flightless bird decal now. 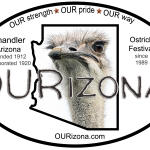