Arizona Ghost Towns: 50 of the State's Best Places to Get a Glimpse of the Old West Paperback

Chandler is located 20 miles southeast of Phoenix and has been the home of innovative, forward-thinking people for many decades. As Phoenix began to grow in the late 19th century, a young veterinarian decided to aquire several acres of the surrounding land. Dr. Alexander J. Chandler took a few business gambles with his new acquisition, and the 18,000 acres known then as Chandler Ranch were soon split into lots and sold as the new town of Chandler. Once the town was established in 1912, Dr. Chandler relied on industrial agriculture and the new, lavish San Marcos Hotel to attract new residents. Later, Dr. Chandler brought Frank Lloyd Wright to redesign downtown and build a new hotel. During World War II, several families and businesses came to the area because of the new Williams Air Force Base. Following the war, high-tech businesses and bioscience firms created a new economy in Chandler, which led to a modern patchwork of people who represent Chandler today. 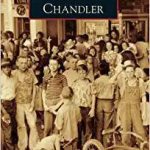